When her father inherits an overgrown orchard, Ruby O’Reilly discovers a magic well. She’s been designated its new “keeper,” and now it’s up to her and her friends Mina and Sam to turn unfulfilled wishes into reality.

Noor and Aziz are six-year-old twins who will feature in a series of educational videos for children living in Bangladesh’s Cox’s Bazar.

Since 2017, more than 700,000 Rohingya Muslims have fled a brutal army crackdown in neighbouring Myanmar.

Half of those in the camp are children.

Ahlan Simsim—“Welcome Sesame” in Arabic—offers a warm and joyful welcome to early learning to young children across the Middle East, especially those affected by displacement. Designed for children ages 3-8, Ahlan Simsim features familiar faces Elmo, Cookie Monster, and Grover, two brand-new Muppet friends named Basma and Jad, animated characters, and pals like a lovable and mischievous baby goat named Ma’zooza who eats everything in sight. Basma, an almost-6-year-old purple Muppet, welcomed her yellow-furred friend Jad with open arms when he moved to her neighborhood, and their playful learning adventures continue as their friendship grows. Basma is a born performer who loves to sing, while Jad expresses himself through art and can paint in midair with his grandfather’s special paintbrush. read more 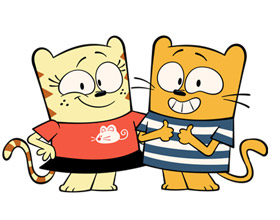 Ollie and Moon are two best friends with an appetite for adventure! When the oh-so-cheery Moon gets a brainstorm, she drags careful-cat Ollie off on a wild expedition around the world. 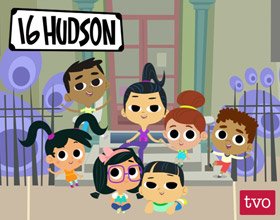 A small neighbourhood in the big city is the whole world for a group of kids sharing the apartment building at 16 Hudson. Sam and Lili couldn't be from more different families, but they've been best buddies since diaper days.